Skype for Business (SfB) Server 2015 embodies several server-side enhancements beyond Lync Server 2013. The patching cycle for the SfB environment will need to be modified to allow for these enhancements. SfB contains five layers of servers, each of which will need to have separate handling:

Host Server updates also need consideration – primarily because rebooting SfB servers can cause Windows Fabric errors that can affect the ability of the SfB server to recover into a running state.

Host Servers need to be patched to corporate standards; however, the application host servers cannot just be rebooted at will. Rebooting servers that host SfB services will result service outages and potentially in service failures where the servers may not recover services after rebooting.

Accordingly, phase one in the entire setup for patching SfB and related servers is to set the Windows Update to download but require administrator to install. For ORGNAME this may require moving servers away from containers to which GPO applies and controls WUPDATE settings. 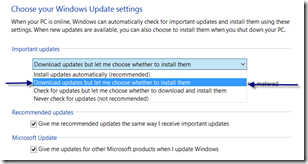 Locate and download the latest SfB server updater from this site: https://technet.microsoft.com/en-us/office/dn788954 - as of this writing, November 2015 is the latest SfB 2015 update.  The consolidated server update installer is preferred over the individual updates.

Note that the file name show is mostly correct, but that I rename them to help me keep track of what is what.

Place the update file in a separate folder on each front end, persistent chat, and edge server.  The update process generates log files which are kept in the origination location. Having a separate folder for each updater constrains the log file location and makes the entire thing easy to delete or verify later. 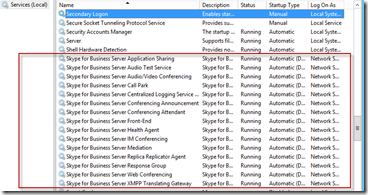 SfB Persistent Chat requires only that the services be running after the persistent chat server is patched and rebooted.

Edge servers are easy. Execute the serverupdateinstaller.exe on one Edge server at a time. Reboot if requested. If a reboot is needed, monitor the reboot process until the SfB services are restarted (about 10 minutes). Otherwise, verify the following services are running.

Do the next edge server.

The OWAS requires different handling from the other servers. See the following articles:

Assuming the two OWAS servers are hlbwowasp101 and hlbwowasp102, the following commands will recreate the OWAS farm when the time comes:

1. From server hlbwowasp101.corp.domain.com, open PowerShell as administrator, and execute the following (command wrapped):

2. From server hlbwowasp102.corp.domain.com, open powershell as administrator, and execute the following command AFTER the previous command on the other server:

After patching, reboot, and recreation of the WebAppsFarm, verify the following service is running on each server:

ORGNAME is using a single SQL server. This server should be patched along with the other SfB infrastructure with the following caveat: The SQL needs to be back online within 30 minutes or there will be impact to the users. The impact will be the clients entering “resiliency mode” due to the SQL server not being available to the front end servers. For more information, see this: https://technet.microsoft.com/en-us/library/jj205184.aspx.

If you have mirrored SQL or perhaps Availability Groups in SQL, then you will need to investigate the SQL patching process from a slighlty different aspect – namely, keeping the active node where you want it.

SfB has changed the patching process from how it was done in Lync 2010 and Lync 2013.  Each layer of the system needs something that is just a little different from the other layers of the system.