Just installed e2010 with SP1  - CAS/HT server.  EMC will not close.  Seems to be an IE9 issue, with mixed reporting of not having the issue and having the issue.  If you have the issue, the fix appears to be uninstalling IE9.  Of course, with the way IE is linked into the O/S, this route may result in other issues.

See this thread for some background.

In my case, simply rebooting the server as a post-install action cleared the issue.

At a customer site doing some due diligence on AD health.  DCDiag from the first Exchange 2010 CAS server against the FSMO holder failed on the DFRSEvent and KCCEvent checks with an event ID of 0x6BA.  Running the same test on the FSMO holder (we need to extend the schema folks!) failed with 0x6BA also.

Once we got the first issue reduced, then another popped up on both the FSMO holder and the DCDiag from the Exchange CAS server:  0x8000043B

Doing a little googling revealed this blog entry that got me started on fixing the issue. However, this blog entry clearly stated that the “Remote Service Management (RPC)” was the culprit. 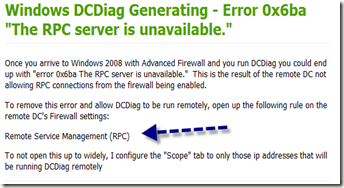 Enabling this rule in the DC’s firewall did not help me; so I started with all the rest that looked like they might be what I was looking for.  Not the most scientific method, but my reasoning was that it was better than turning the FW off entirely.  Also, all other data I could find for this issue all pointed back to the one blog – that guy should be charging for plagiarism!  For my situation, we had to enable this other rule also:  “Remote Administration (RPC)” as shown. 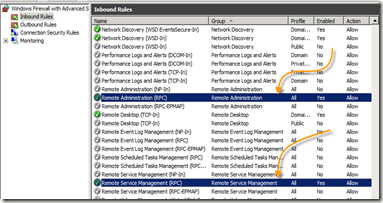 At this point, DCDiag /s:fsmohost completed so quickly you would have thought the entire thing errored out.  Instead, what it did was pitch the KCCEvent event ID:  0x8000043B.  Not good, I still need the FSMO holder to behave so I can extend the schema (amongst other tasks…).  After wading through more googles, the fix to this second layer of error was:

wala!  Nice clean dcdiag runs from both the FSMO holder and the exchange servers.

Here is the formal notification.

A new document up in the download center outlines BPR for running Lync 2010 in a virtualizzed environment.

Do you support Lync users?  Are you a newbie type and are sort of lost?  Then this is for you!  Also for those who think they are “experts,” because we can always learn something.

This resource is aimed at first-level help desk agents who support Microsoft Lync Server 2010 clients. Note: The .zip file contains both the print documentation and the Help file.

The Security Guide provides guidelines for assessing and managing security risks to your Lync Server 2010 deployment.

A handy excel tool for calculating, you guessed it, bandwidth requirements for Lync.

So, I have this zippy new laptop from work.  Nice piece of gear. Windows 7 x64 Ultimate, bright display, 8GB RAM, good HD, pretty quick overall. Did I mention how nice this thing is? Office 2010, added Visio 2010 – I have these documentation needs and I simply must have both of these. Clients sort of expect to see the “expert” using the “latest and greatest” so I use the Office 2010 level.  Note that I put those words in quotations.

Doing a cut n paste from Visio to Word was resulting in one of the two kicking up an error about how the “…*.exe has stopped working.”  This gives you a few selections like checking online for a solution – ya right, or closing the program.  Luckily I have not lost any data…but this is really annoying and slowing down my work.

I fixed it by removing the “send to bluetooth” add-in for both programs.  I would give you screen shots, but I did not just disable the add-in, I removed them.

Problem solved.  So if you have these little “issues” with office apps “stopping” then try that….why would I want to send my multi-megabyte doc to some bluetooth device?  Printing?  Maybe, but not me.

While doing the “Prepare first Standard Edition Server” step, I ran into the following error…

this turned out to be fixed by going to:

and then delete the following key:

I then rebooted.  I don’t know if that was required.  But my problem was resolved and I was able to move forward.  Kudos to Thomas Foreman for posting this in a forum.