The other day, I escalated a colleague’s IM to a video session – and failed.  It just would not come up.  I could click on the video icon – it was not greyed out or disabled… 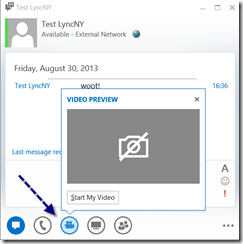 But, no video. I then checked a variety of things, to include a reboot thinking that something went sideways with drivers or whatnot.  After all, we are talking about a laptop with a camera in the lid.  You would think that should just be working, eh wot?  But no.

So, I plugged in a Logitech C930.  Just to see what was what.  And it worked.  Well, it looked a little black until I flipped up the privacy screen, but at least I had a camera. 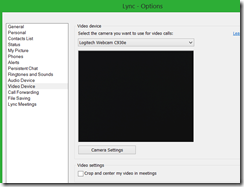 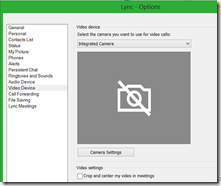 So, now I was really confused.  I mean more than my SO says is my normal level of confusion.  Which at times can be fairly high.  But I digress.

With a little poking around, I came up with a discovery.  It would appear that not all camera drivers are alike (who would have guessed that?). Even though they all fall into the same rubric of imaging devices, they are using different drivers. 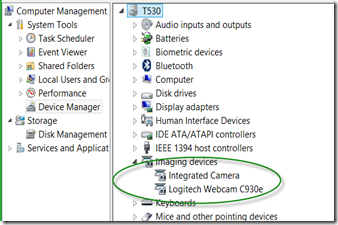 Filled with a sense of shock and awe, I pondered the question of why one camera would work with one driver and another camera would work with another driver.  After about three seconds, I realized that the cameras had different manufacturers.  And I was being easily confused.  After all, why wouldn’t Microsoft include drivers for every last device out there?  We have all that drive space, and we want Plug n Pray to work.  So, with these clues, and another laptop to work with, I went hunting.  And found me an answer.

No, not an answer to world peace or solving hunger, or anything like that.  But, if you have a video conference in which to participate, something almost as important!  To whit, why won’t my stupid camera work!  Well, long story short, it has to do with the driver, and, believe it or not, I think also with the default install behavior. The left hand image here is the Logitech C930e; remember I said it worked right off the bat (but a little dark because of the screen)?  The right hand image is my built-in laptop camera.  Notice anything different?  I will wait whilst you make some detailed comparisons. 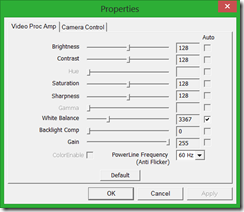 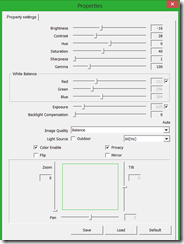 Besides the obvious  - the drivers provide for different feature configurations, the driver for the built-in camera also has this little gem: 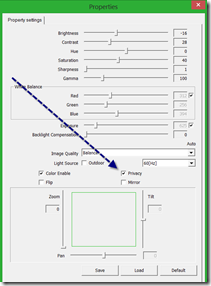 Thinking that I wondered what that did, I cleared the check box and guess what?  I got camera display now. 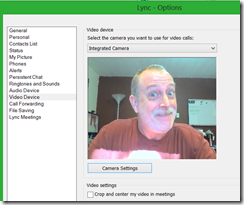 Isn’t this fun?  So I checked my Twist.  Now, you would think that a Lenovo T530 manufactured in the same approximate time frame as a Lenovo S230U (the Twist is actually called a ThinkPad S230U)(but you know them marketing types and Americans.  Gotta have a zippy name…) would have the same camera?  I sure did.  But no.  Wrong again. Note that the Twist camera driver and feature selection looks like this: 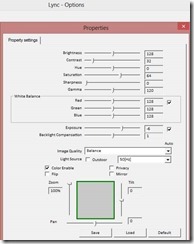 See, same little “privacy” setting.  Checking that box achieves video privacy alright.  It turns the camera off!  Once you clear the box, you are good.  But this doesn’t end here! I checked with some co-workers. Guess what?  My co-workers have the SAME LAPTOP AS ME.  Different driver, no privacy checkbox, does not have this issue.  I think that somewhere along the line I updated my Lenovo drivers and got a new build that apparently has a privacy “fix” that defaults to “on.”

OK, how to make this go away and not come back?  Well, clear the “Privacy” box.  And then click on the default button.  NOT THE APPLY button, the DEFAULT button. 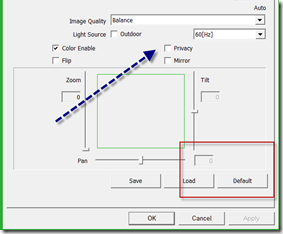 I recently had a small issue with the Monitoring Server reports – specifically, the Dashboard view returned the following error:

Report processing stopped because too many rows in summary tables are missing in the Quality of Experience (QoE) database. To resolve this issue, run dbo.RtcGenerateSummaryTables on the QoEMetrics database.

Oh, how nice.  There are numerous references on the internet to this issue, and they all involve going into SQL manager and executing stored procedures on either the LCSCDR or the QoEMetrics databases as shown. 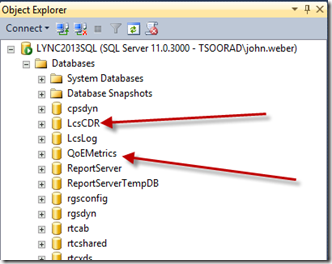 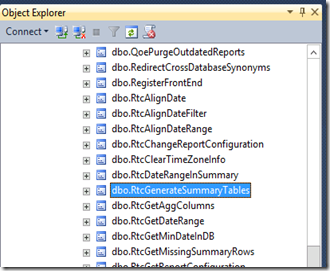 All well and good.  For the sake of completeness, here is the actual procedure outlined so you can see it.  Note that the issue outlined here had both databases mentioned, I only had the one – but, I forged ahead and ran the stored procedure against both databases just for good measure.

Fail.  Redid CU2 and SQL SP1 across the environment. Fail.

OK, back to UofG for some more edimication.  After about 2 hours, I found this little tidbit at the bottom of a forum article: run the dbo.RtcRecreateSummaryTable procedure. 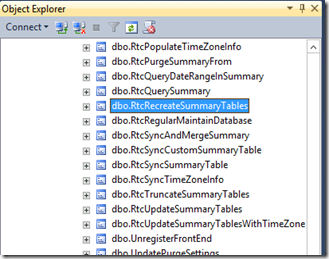 Having nothing to lose, I did this, and wala!  Success.  FWIW, I executed the dbo.RtcRecreateSummaryTable  to both LCSCDR and QoEMetrics – but let us not complain too much, my dashboard is working again.

My company provides me with a Lenovo T530 that is a pretty nice piece of gear (what they provided is actually a seriously nice hunk of goodness – but that is just my opinion – others might think differently). However, the 250GB SSD is a tad small. Thinking to get around the storage limitation, I noted that I did not ever use the DVD drive, so how can I re-purpose that drive bay?

I assume that this will work with the 420, 430, and 520 series as well. http://www.thinkwiki.org/wiki/Ultrabay - pay attention to the type of UltraBay your laptop has and the feature set matrix.

I get asked all the time:  What reports are available from the stock Lync Monitoring server reports?

Well heck, let’s take a look, shall we?  Open the Lync Control Panel, open the “View Monitoring reports” as indicated and then select your configured reporting server. 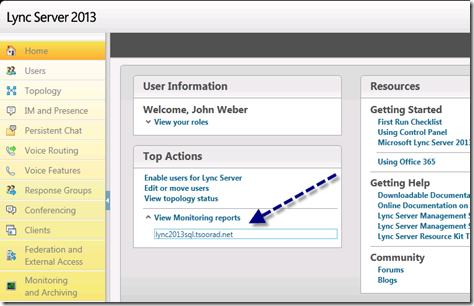 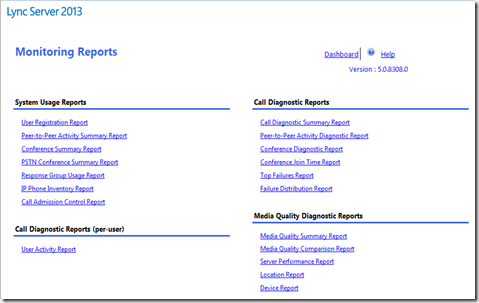 At this point, we need to look at existing documentation:

Some of the report categories have sub-categories that you can drill into…some of them require that you change the date range for the report and then click on the “view report” button.

There is also the “dashboard” view  - handy if you like that sort of thing!  Weekly and Monthly views. 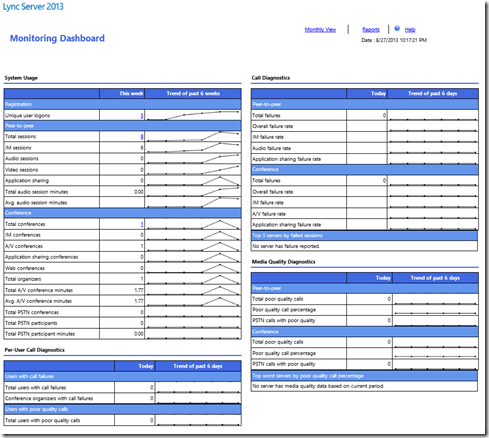 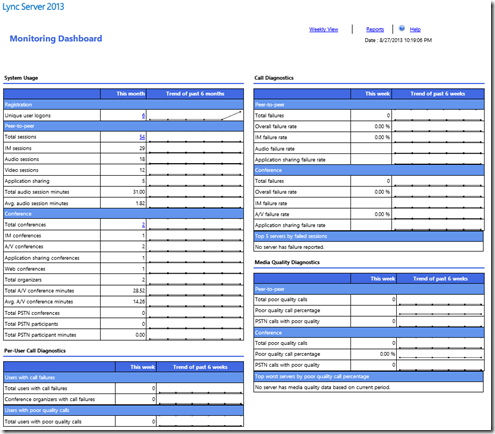 I don’t know if this has any bearing on the news that XMPP is going away at Google – but it sure dovetails with my thoughts regarding Microsoft….

For those us with vested interest in seeing both succeed, this is, at the very least, interesting in scope and depth.

Make your own judgments.  I was going to do some zippy analysis for you, but MVP Matt Landis beat me to it – and while I might quibble a bit on his comments, his observations are close enough to mine to save my fingers from beating my keyboard into submission.  You can find Matt’s analysis here.

Over the last few days my reading project has been a book by Lync MVP Fabrizio Volpe, “Getting Started with Microsoft Lync Server 2013. 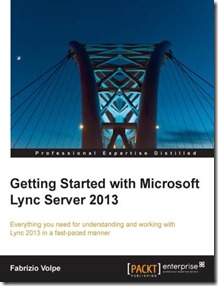 A short book of only 100 pages or so (I have it in PDF format so it is hard to judge exactly how many of what is there) – Mr. Volpe has distilled the basic requirements, setup, and features into what amounts to an install guide.  Pretty handy for someone who is getting their feet wet with Lync Server.

PackT, as the publisher, has this description for the book:

“Getting Started with Microsoft Lync Server 2013 will teach readers the concepts they need to know to quickly administer and plan a Lync 2013 environment, explaining to them the background mechanisms of the system. The book includes a core chapter on Enterprise Voice, as well as a closing section on Persistent Chat and on clients and their characteristics.Developers will discover how to enable voice features, how to select the best Lync client in different scenarios, make Lync services available to external users, as well as how to empower the collaborative environment of Persistent Chat Server rooms.”

The text has numerous handy references to Microsoft documentation and does good job of explaining WHY.  Lync has more than a few moving parts, and having this guide to step you through your initial efforts could be just the thing to get you on the road to first-time deployment success.

Having a second point of view explaining a concept or procedure is a valuable technique. I can see using this book to fill that role.

I was doing a Lync 2013 Edge server, and I noticed that the IP addressing on the external network interface was stuck with DHCP of 169.254.230.1.  Along with the desired DMZ external addresses.  Not so great, and it would NOT go away.  Looking at ncpa.cpl showed that I had the stupid thing configured correctly.  No amount of chanting or invoking the mystic powers made a difference. I mean, look at the route print – just the sight of this made me wonder just what the heck was going on!  Nice gateway and interface combination, eh? 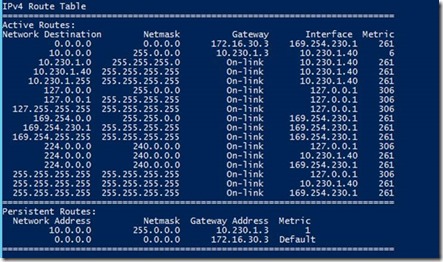 Get-netipaddress showed a correct setup. but it also showed that silly AIPCA thing too. remove-netipaddress seemed to work, but the 169.254 IP  would not go away.  Reboots, disabling NIC, we tried it all.  Nada.

This here fixed me:  http://lyngtinh.blogspot.com/2011/12/how-to-disable-autoconfiguration-ipv4.html

Mounted an ISO from a network resource \\servername\sharename\imagename.iso

Then it would not eject. “An error occurred while ejecting DVD drive…”  Ya think?

I exhausted my voluminous (read minimal) “the drive is stuck” knowledge base.  UofG and UofB gave me nothing.  However, I did discover some nifty powershell stuff like mount-diskimage, dismount-diskimage, and the ubiquitous get-diskimage.

But, alas! no joy in Mudville.

One of my co-workers Lync’d up and gave me this suggestion:  compmgmt.msc, drive management, eject from there.  Wala!

I assume (well, my budro says…) that something got “stuck” and had a file or something open and it won’t let the normal UI eject the drive, but the Drive Management tools will do it.  Can we assume this will be effective in Windows 8 also?  I hope I never find out, but you know how that goes.

I am currently genuflecting towards Marrietta, Georgia.  Thank you Edward Walton, the Man, the Legend.