Doing an upgrade of the entire environment, Lync 2010 to Skype for Business Server 2015 – on-premises.  The existing dialin conferencing was ITSP to Avaya 6.3 SM to Lync 2010 Mediation server.  In this case the mediation servers were a separate pool from the FE pool.

When we moved the first pilot users to the new pool and then tested against use cases, the dialin conferencing failed.  Oooops!  Some tracing and sharking of wires, along with looking at the client-side logs was pretty clear.  The call landed on the Lync 2010 mediation server just fine, the conferencing attendant on the Lync 2010 FE (and the proper one at that) picked up the call, but then promptly dropped the call during the conference identification phase.

I have seen this issue before, back in the murky days (daze?).  But usually you see this with simul ring or call forwarding out of the system to the PSTN.  See this here for some background.  I had thought this was fixed in Lync 2013 as I had not seen this for a long time.  And then, for some reason I thought it had been fixed in SfB.  But, apparently maybe not.  And specifically, if you are doing 2010 pools to SfB pools.  See this here for the exact error (or at least a reasonable approximation). 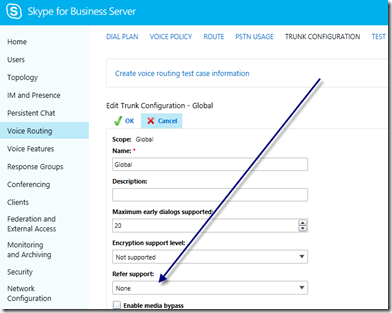