A Plantronics BT device came into my hands the other day.  I have been thinking about this device style for a while – I see folks with them, and always thought my existing BT device was good enough.  But, I keep seeing them, so…what’s the story. What’s the draw?

Here is the official market speak on the Plantronics Voyager 6200 UC.

Here is a pretty picture, just so we know what we are talking about. 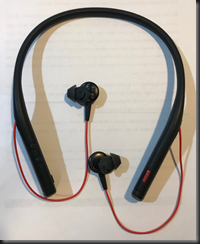 Isn’t that just the world’s best cell phone photograph?  I was going to use the PLT graphics, but that would be just sucking up, because… I am fixing on saying how great the 6200 UC is – maybe only for me, but these things are bordering on being the greatest thing since sliced bread.

As I pondered what to say, I realized that after testing with Skype, SfBO, Teams, and my cell, all to great success; (great audio, pretty good background noise suppression (ANC), and typical excellent Plantronics build quality) that I wanted to continue with Magic Slim and The Teardrops.  That in itself is telling.

Usually I test a device, make some quality comments, observe if it does what my use case scenarios dictate, and determine comfort and audio quality – and then, fair or not, compare to my existing device stable.  In the case of the 6200,  I just kept using them and knowing that I had 9+ hours of battery, I kept testing.  At some point, I stopped testing and just was “using” because this device moved into the “actively used” category.

So, let’s dive in:  According to the aforementioned market-speak: 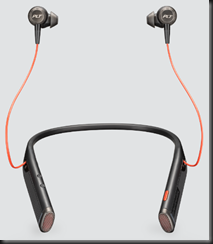 You can get a fancy market-speak sheet to impress your budget approval process.

The Tsoorad Test Labs says that this 6200 is a 9.9.  I had to adjust to the ear thingies.  Small was too small.  Medium was too medium.  Who uses the large?  The device around the neck thing pretty much was a non-issue.  I like the idea of ripping the earphones out and dropping them, and they go nowhere.  Nice if you are like me and wonder where the earbuds went to.

All my laptop functions worked as you would expect from Plantronics.  Already paired to my cell phone, inserting the BT600 dongle resulted in a few binks and bonks and wala! working as expected.  I typically do not operate my headset on two at once, I find that the ever-changing volume settings bothersome, and if you are a music at work person, the constant interruptions in the music flow are bothersome as well.  I am sure there is some esoteric setting buried in Windows somewhere to stop that, but I have never found it.  SfB 2016 client picked up immediately.  Teams picked up immediately.

Audio quality for voice is very nice.  Good volume control in terms of range of adjustment.  Bass response is at least as good as any other earbuds I have tried.  Microphone pickup sensitivity seems most excellent as well.

Musically, the 6200 suffers from lack of driver size just like any other set of earbuds – I don’t care who makes them, bass is achieved by moving air, and those little cones in an earbud simply are taxed by bass.  Having said that, the 6200 cranks along right well.

There’s even an APP for that.  Yes Matilda, in the space of just a few minutes I was controlling my 6200 with my phone.  Gosh, how exciting!  Firmware updates, turning things on and off.  I felt empowered.

What’s in the box?

A carry case (actually pretty nice), a short USB cable that connects to either the 6200 or the included charging dock/stand.  And, for you double-up-the-device types, a BT600 dongle so as to enhance the laptop media experience. Oh, and three sizes of ear cushion thingies. 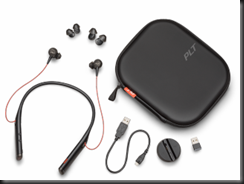 There are various views on this subject.  Personally, I think to a large extent you get what you pay for.  If you want to pay $29.99 for a set of wireless earbuds that are BT, have ANC, and that deliver some serious music reproduction chops, while allowing you to make and take calls on your cell and your laptop, then get ready to be disappointed.  But, if you want something that rocks functional, is durable, with features you can use, and then proceeds to wallop music, then this is the price point for that excellence.  You can get yours right here.

Usually, in testing I include all the stuff above. The Tsoorad Test Lab Score is limited to the 9.9 (ear bud fitment) so the 10’s I was going to give it in all the other categories got trumped.  I could have said that.  OR…

In this case, I could have just made this statement: “These things are firmly in my “keeper” category.”  Seriously excellent stuff here.

Happy to report that based on rigorous Tsoorad Lab testing, all seems to be pretty good with this update.  Numerous new features (especially on the 445)  that bear looking at.  In my testing, I did not discover anything wrong – no devices bricked, they all came back working as expected, new features were there, everything worked as before (always a plus).

You can get yours right here. After 3.1 reaches GA, AC will  (I am somewhat convinced as they have in the past)  create and publish the necessary CAB files to enable pushing this update via SfB/Lync webserver methodology.  If you use the IPP Manager (either express or full) the IMG files work for updating – in my environment, it just works.

SfB CSCP view of the old goodness – but you get the idea, right?  Just noticed that the HRS image cab is not showing.  I have asked my AC contacts about that.  Time will tell.