Gees, two edits in one day…

This is only the first three chapters…

On the Microsoft download site, we now have the Lync 2010 Server 2010 Resource Kit.  This is the technical reference that is a companion to the product documentation.

Update:  I have stopped trying.  I hang my head in abject defeat.  I edited registry until my fingers bled….and all I accomplished was a network stack that refused to work.  I tried, I really did.  I followed instructions, I used the”approved” vendor-supplied tool, I read the blogs.  Nada.  At the end, I had the Teefer2 driver and service gone, with a NIC and driver that Win7 said it liked and enabled, but the firewall would not start because the Base Filtering Engine would not start because of a) lack of permissions, and b) having a wrong pw on the localservice account.  Luckily, this is why the VM is so good for us.  Eliminar la instancia de la imagen y seguir adelante.

I had to remove SEP 11 from a system.  Oooops!  First, I could not get it to go away.  Had to get a removal tool.  That took some judicious torrent work to find as I could not get Symantec non-help to give it to me….I did not have a license nor a support agreement nor the magic decoder ring…just a P2V image from which I was trying to remove SEP.  C’mon folks… it is just a lab machine!  I have all the approved licensing….except for this Symantec piece I was trying to remove so I could be legal….my mistake.

So CleanWipe did its’ thing.  Sort of.  It left me with a non-working network stack due to this Teefer2 driver that really does not want to go away.  After many hours, literally, of Google, I stumbled upon some advice that led me to remove the hklm/system/currentcontrolset/enum/root/symc_teefer2mp key.  At which point I was caught in a BFO….I think I know why these Symantec products are so hard to get rid of….

BTW, as background, in my reading over the last few hours, it is apparent that this teefer2 POS has a purpose in life redirecting traffic to SEP for scanning. My hypothesis is:  in an effort to make sure that malware cannot circumvent SEP, the clever developers created registry keys that cannot be modified except by superhuman effort.  OMG!

My right hand hurts from the mouse clicking that it takes to remove on sub-sub-sub key.  But hey, it is only 0100 on a Monday night.  WTF eh wot?  People buy this on purpose? 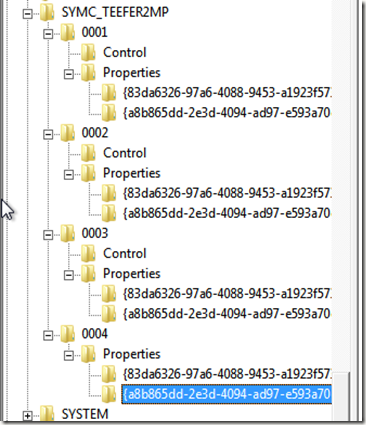 See all that?  Each and every key – and I have removed about 20 so far, require administrator explicit assignment for full control and seize ownership so as to enable deletion.  EACH ONE.  And under the GUID there is several more.  Logged in with safe mode, as the machine administrator, not a member of administrators, and then have regedit run as administrator.  Save me Mr. Wizard!

Microsoft has updated their Lync Server 2010 virtualization guidance and best practice document.  Get it here.
at March 10, 2011 No comments:

The Lync Server 2010 Stress and Performance Tools (LSS) can be used to prepare, define and validate performance targets of user scenarios offered by on-premise Lync Server 2010 deployment. LSS includes multiple modules and can simulate simultaneous users on one or more Lync Servers. More detailed information can be found in the documentation provided within the installation package.

A nice capacity planner for Lync Server.  Keep in mind that this is not a bible but it does represent a very solid starting point and you may find that the output meets your requirements as is.  Get it here.
at March 10, 2011 No comments:

Published this month is a new guide on deploying Lync Server 2010 in a multiple forest environment.  Get the doc here.
at March 10, 2011 No comments:

I ran across this compendium of Lync User Training at VoipNorm...with a bit of re-edit, I am reposting here.  Great stuff, thanks Chris!