The ability to connect a mobile device to the Lync infrastructure is a feature that is missing (natively) from the Microsoft suite of Lync clients.  We have  been told that the mobile clients are “coming” but  - nothing yet. Damaka.com publishes a line of Lync Server 2010 clients for mobile devices known as Xync.  According to damaka, Xync is available for iOS, Android, and Symbian.  Isn’t this a pretty picture?

Xync for iOS has my attention – you guessed it – I have an iPhone and an iPad.  I would LOVE to have something to replace iDialogue and its’ need for an OCS CWA server.  This article is a review of the Xync client, how it operates against my production Lync environment, how it interacts with my laptop (full Lync) client, and a run through of how the Xync client behaves in IM, video, and audio calls and conferencing.

Let's start with the Xync client itself.  There are three (count ‘em!) versions.  Xync, XyncConf, and XyncCollab.  Actually, there are two more also, Xync-HD and XyncConf-HD.  So, when faced with five different choices, which one do you want?  I asked that very question to the fine folks at damaka, and after a (what I feel was a lengthy) delay, I got the following answer:

Take a look at this and observe that the prices go up as the features go up.  I do not have understanding of the business logic that made up the delineation of the feature sets into three clients, but there it is.  Also, note that the XyncCollab client (the one I purchased) is not marked as “+” (meaning  both iPhone and iPad). 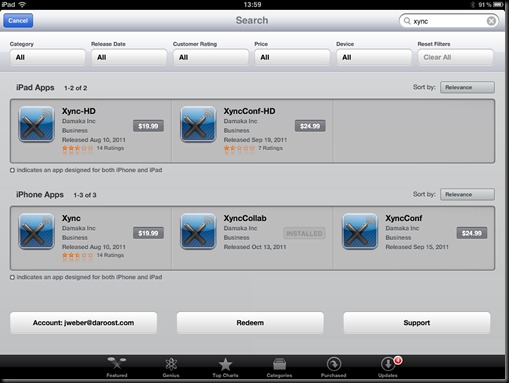 Why is there no HD version of XyncCollab?  According to damaka’s Ramesh Chaturvedi, the XyncCollab-HD is coming and should be on the appstore soon (in approval process).

What are the differences between iPhone functionality and iPad functionality (xync and conf and hd) ?  According to Mr. Chaturvedi, each is optimized for the intended platform.   I used the XyncCollab on an iPad, and noticed some things that did not work as expected – such as following the screen orientation, and having that lovely 1x-2x button on the bottom right corner of the display.  Using the 1x-2x button increased the view – and not too badly either.  Resolution seemed to scale fairly well; not like some games and whatnot where the smaller screen resolution for the iPhone looks crappy (to put it mildly) when increased to 2x.

damaka claims to offer full functionality – full Lync/OCS client – no backend hardware/services required.  As to the “no backend” part, I agree.  Xync connected via our Edge just fine – in fact, it used the obvious route of discovering the SRV record and connecting.  Here is the login screen. 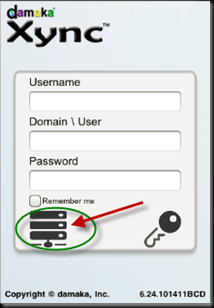 The various data blocks are filled out like normal.  Tapping the indicated icon will present you with the custom login screen.  Notice the Office 365 option; pretty nice for a third party. 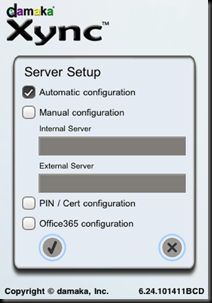 Back to our initial login screen…enter the necessary info, then tap the key icon. 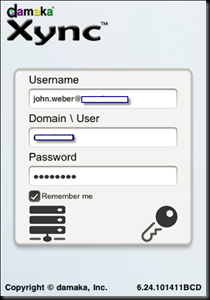 Hola!  We are in.  I did nothing other than what I would do for my regular Lync client on my laptop, nor did my companies admin have to do anything to support my efforts.  Notice that brought my contact list groups right in as expected. 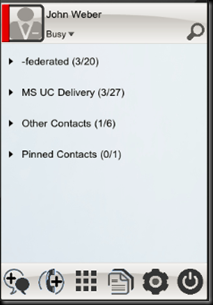 The basic controls are (from left to right across the bottom), create a conference, create a voice conference, voice calls, active sessions, preferences, and sign out.   I never did get the conference controls to work.  Many times I would follow the “double tap” instructions only to have the client disappear from screen. 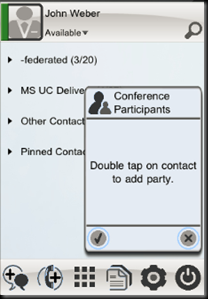 Very funky and strange.  Sometimes the client crashed and sometimes it did not.  When it did not crash, the client went down into the tray and I had to double the home key to go get it or choose Xync again from the desk(tablet)top.  If this is why you want to use this tool, I would say it makes it a “no go.”  Adelante.

IM worked well when I got that far. Choose a contact, and then the arrow icon on the right side. 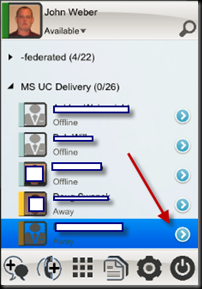 From the next screen, you can choose your communication modality. 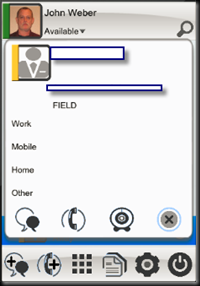 From left to right, IM, voice call, video call, and I will leave it to you to guess the purpose of the “x'” – although that is pretty obvious.  One quirk I did notice here was that you can have one of each with each contact.  So, opening an IM, a call, and video session results in three separate sessions with that contact.  Not what I was expecting.  But hey, lookee!  File transfers worked! 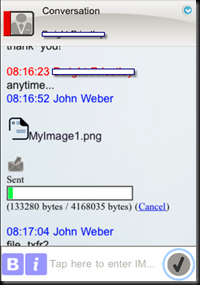 Once you have an IM session open, hitting the drop down as shown gives you the modality choices again.   But, then we had multiple sessions open at once.  And if you do that, you need to know that there is swiping needed to go swipe left/right to page through the sessions.  That took me a goodly bit of time to discover. 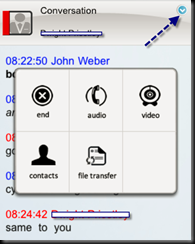 Voice calls worked well, as did video calling.  On the iPad you can flip between the two cameras – so this makes your iPad a potential mobile conference room video source.  Here is a nice shot of my hotel; pretty good video from the front iPad camera. 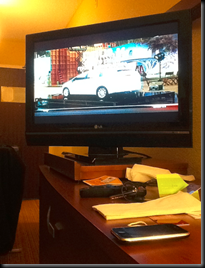 However, on the same vein, the initial video setup has your local video plunked right on top of the remote video.  And it took me some frustrating time to figure out that I could swipe the local video and make it disappear.  Other than troubleshooting, I don’t see a lot of value in the local video being the size it is, nor does it have much value – I know who I am and what I look like! 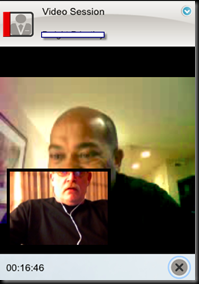 Video is h.263, Mr. Chaturvedi said that rtvideo is planned and coming.

Audio calls, using the interface given, turned my iPad into a telephone across the local wireless connection. Sweet! 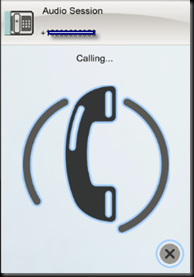 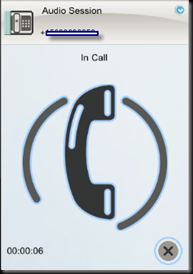 Desktop Sharing also worked well, but only as a participant. I could not originate the DTS session.  Once I had the share sent my direction, I could have control – so this is a partial win. 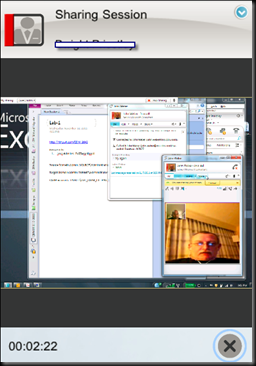 The User guide/manuals are on the damaka website.  There is a goodly amount of help/information there.

I noticed that PIC contacts took a LOOOOOONG time to update presence.  I never spent any time on this, but contacts which showed online in my Lync client would show as offline in Xync.  Odd.  Yet once I sent them an IM from Lync, the Xync updated their presence and then was willing to work with that contact.

Having my iPad be able to make and take phone calls based on the corporate PSTN structure was simply outstanding.  Video calls ditto.

I noticed no method of location input – how does this translate to e9-1-1?  Mr. Chaturvedi said that this feature is Not supported for location services at this time.  If you need this for your deployment, then you may be out of luck until a further update.

I find the pricing a tad steep – but who else is providing this service for my device for my infrastructure?

Performance over hotel wireless (on both ends) was highly acceptable.  Not perfect, but my assessment of the performance issues was that the wireless was the issue, not the iPad or the Xync client.

Licensing for individual v enterprise is available as is the possibility of using MDM on site to allow the corporate to control clients. 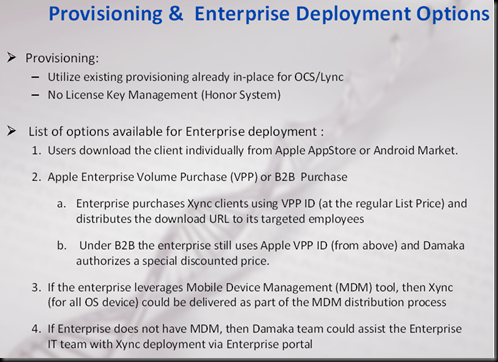 Finally, damaka has Xync data which can be found here:

I hope this helps you make your mobility client decision.