In keeping with a previous post, I submit this: 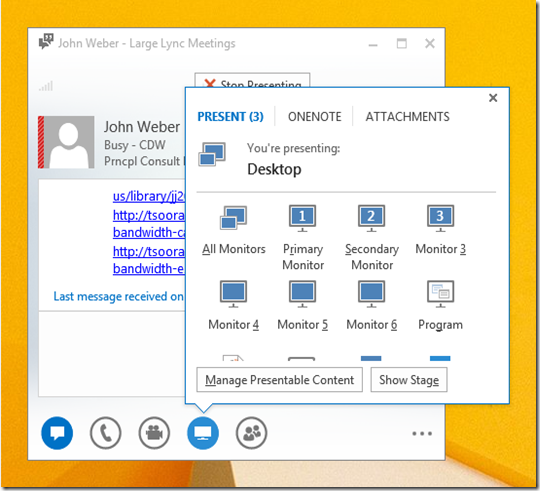 Just be careful about doing “All Monitors” as this could create a serious eye-chart for the far side!

And, just for added ammo, at least one of these displays is a 4k.  Sweet!

For those of us who are involved with doing Lync on-premise, one of the issues is meeting joins by outside/external invitees who happen to have Lync installed as part of Office, but don’t use it… which results in failing to join the meeting, which results in a help-desk call, which results in a call to us wanting us to “fix it” when nothing is broken.

Well, here is something that explains why this happens, and a recent change to the Lync client that may help resolve this issue with no action on your part.

IMHO, this is a great move in the right direction.

Of course, you can always show your customer how to edit each and every meeting invite to include the ?SL=1 suffix…which is a crappy solution at best, but one that works. And then there are various Exchange-based transport rule fixes: however, this fix is a bit clunky in that it will insert a generic string;maybe not the one you want per user.  I had one awesome customer who wrote a custom transport agent that works, sorta…sometimes…and which of you out there has enough time for custom coding work that may or may not be successful.

Sure would be nice if Microsoft would simply put two links in the original meeting invite – so that it looked like this with the obvious link already having the ?SL=1 code entered… 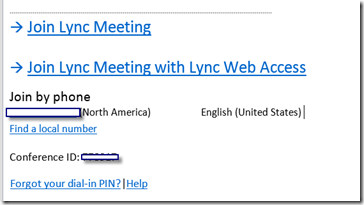 Why is this needed?

Lync Online can operate in a split-domain configuration, with some users on-premise and some homed on the O365 tenant, but this is not a requirement. However, if you want to enable your users for Enterprise Voice, then the Lync environment MUST HAVE a Lync 2013 user pool located on-premise or operate in a complete hosted mode. If you don’t want the hosted mode option, then you need to deploy a Lync 2013 pool on-premise to augment your O365 tenant. This option will also require the “E4” license level.  Microsoft says this about O365 Enterprise Voice:

And if you do the hover thing over the little splat, you get this:

So there you go, you can use Office 365, but if you want to include the goodness that is Lync Enterprise Voice, you are needing to deploy Lync 2013 on-premise.  Using the Lync 2013 split-domain model requires setup and configuration on both the internal (or Azure, or both) Active Directory, needs some directory sync between the Office 365 tenant and your internal Active Directory, and also needs at least 2 servers internally, as well as various other servers, devices, and appliances such as SQL, reverse proxy, and telephony gateways.  To get a better idea, take a look at this and this.

And wow, does that sound complicated or what?  For an organization with limited technical resources, this might be a daunting task – and a concept that might well cause a re-think of the O365 idea.

Aimed at supporting 200 users, One Box 365 addresses these concerns by offering the small(er) organization an appliance that has everything except call recording, reverse proxy, and the Web Apps Server (needed for PowerPoint presentations in a web conference) in (wait for it) One Box.  Tricky naming there, eh wot?  Here is the AudioCodes market-speak.

Based on the Mediant 800B Gateway chassis, and delivering all the wonderful packaging of the Mediant 800, One Box 365 has the following pre-installed, and ready to rock with minimal delay:

With the Mediant 800 chassis, you can also get FXO and FXS, so your analog devices are covered also.  Connectivity to your telephony solution is pretty much limited only by your imagination.  Being as how AudioCodes has one code base, you get the industry-leading gateway translations as part of the bargain. SIP, TDM, POTS, E1/T1, PRI/BRI, AudioCodes has the connection part covered. I have yet to see a PBX that AudioCodes cannot translate. Here is the official language: 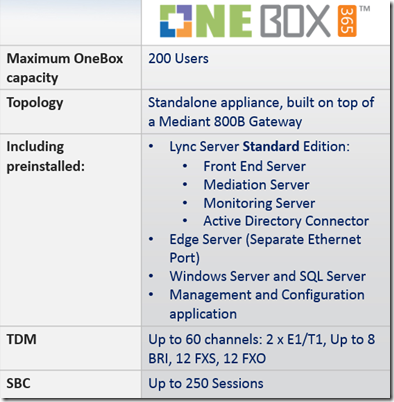 Well, it uses electricity, but that is a subject for another time.  By syncing with Active Directory, One Box 365 provides the user pool services needed for your on-premise users and connects to your PBX or ITSP SIP trunk.  Simple, yes?  Here are the official deployment types. 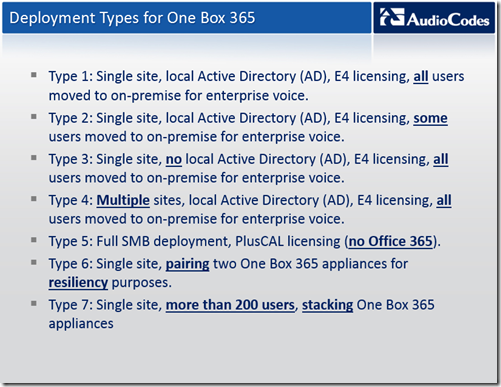 Note that you can also deploy One Box 365 as standalone Lync solution.  But, wait!  There is more (like the ubiquitous TV commercial).  You can stack multiple One Box 365 units to achieve pool pairing or support more than 200 users.  Also, I have heard (from the usual “unnamed source”) that larger solution sets that support more than 200 users (with a single appliance) are “coming soon”.

At any rate, One Box 365 takes this deployment model – which is where the smaller business might start questioning the wisdom of using Lync Enterprise Voice with their O365… 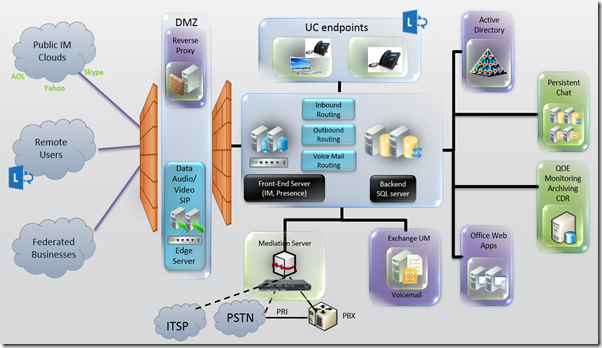 and replaces a goodly portion with this: 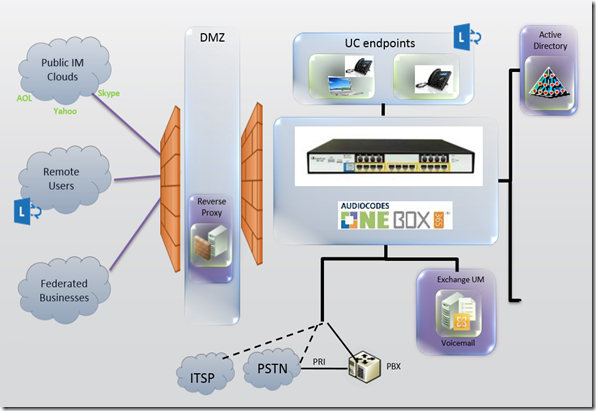 A few notes on my part

Active Directory is in the box.  If you so choose, you can nuke the pre-deployed option and join your existing Active Directory – but that is not for the faint of heart or technically challenged.  But, in my view, possibly a better choice than having the complexity of the “resource forest” model.

The current hardware configurations seem to be limited to a chassis with only 4 FXS ports, I would like to see more FXS (this could just be me), and if you want more than 4 FXS, you will most likely be looking at a MediaPack.

You might think that not having the reverse proxy and the Web Apps Server in the appliance would be a negative, but IMHO, most folks already on Office 365 have a reverse proxy deployed (they might not know it) and I have also seen a trend of users not “presenting” a PowerPoint file – they are sharing their desktop; so the Web Apps Server is not critical  - especially in the One Box 365 target environment.  I also hear – from the same aforementioned “anonymous source” that RP functionality might just be possibly, hopefully, “coming soon.”

Someone with an AudioCodes SBA (Survivable Branch Appliance) might wonder if the Mediant 800B OSN (Open Solution Network) card has enough resources to handle the One Box 365 load.  Fear not!  The regular Mediant 800B SBA OSN is powered by an Intel Atom n2800 at 1.86GHz with a spinning disk, while the One Box 365 OSN is an I7 Gen3 with 8GB RAM and SSD.  Should be more than enough for handling the supported load.

Office 365 requires a full Lync 2013 pool on-premise to support Lync Enterprise Voice.  The Lync 2013 model is referred to as split-domain (it used to be referred to as hybrid). One Box 365, as part of AudioCodes One Voice provides a single appliance with which to enable your users for Lync Enterprise Voice while keeping your Office 365 environment intact.  One Box 365 offers full integration and native support for all Lync 2013 functionality.  Each One Box 365 appliance will support 200 users, and multiple One Box 365 appliances can be used to achieve pool pairing or supporting bricks of 200 users – while whispers do exist of larger capacities being in the works.

Based on your business requirements, AudioCodes One Box 365 could be the solution for your organization.

I got back from a short conference trip to find a box waiting for me.  The nice folks at Jabra sent me a squeaky new Jabra Evolve 80 MS UC.

Here is the market-speak straight from some professional writer up in Jabraland:

“The Jabra EVOLVE 80 MS Stereo is a professional headset designed to improve concentration and conversations. Premium noise-canceling technology gives you peace to work in the noisy, open office effectively creating a concentration zone around you, so you can stay focused on the job. The speakers are built for style and comfort with leatherette ear cushions, and are specifically designed to reduce office noise. When combined with active noise-canceling technology, you get maximum protection against office noise. The concentration zone is completed with a busy light indicator that signals user availability to colleagues.”

And in the “Optimized for Lync” category:

“The Jabra EVOLVE 80 MS Stereo is optimized for Microsoft Lync, providing instant “Plug & Play” installation for your headset. The headset works perfectly with your Microsoft Lync, so you can focus on the conversation.”

Blah, blah, blah.  Except that when you ignore the hyperbole, the Jabra Evolve is a very, very nice headset.  Can I go past “seriously nice” and maybe go all the way to the first ever Tsoorad 10/10 award?  No, nothing is perfect.  But I think I can go to 9.9.  Everything claimed by Jabra seems to be backed up with performance.

The noise cancellation is excellent.  And once you have it enabled (a switch on the bottom of the right ear cup) you can disable it with a press of the toggle switch in the center of the ear cup.  Very nice. 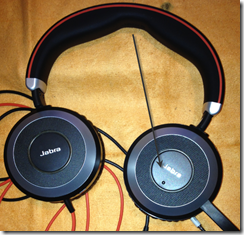 The hype about the “concentration zone” is no BS.  Comfort is as good, or better than anything else I have used.  The inside of the ear cups did not give me the willies. The microphone boom doesn’t stick way out in front of your face.  Did I say these things are comfortable? 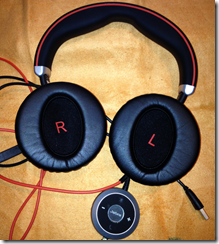 Audio quality is (searching for a superlative) really awesome.  I tried Pandora, real stereo unit, my iPhone, iPad, laptops, workstations.  In each case, the Evolve 80 performed much better than my Bose Quiet Comfort 2.  When connected to something that does two-way communication it just gets better.  The “Listen in” feature is slick.  Having a separate 3.5mm connector built right in is a great idea. 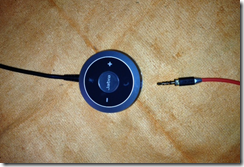 The Jabra busy light concept is … different.  The inline module has a center button, and if you press it, both the module and the headset light up.  This is separate and can be enabled without being in a call.  A virtual hideout.

The Jabra PC suite is nice.  I actually downloaded it and played with it.

Pushing the inline module mute button does indeed mute. Rotating the microphone boom up mutes also.  I would prefer a button or touch point or something on the boom or ear cup to do the mute.

Weight.  I understand that to get this thing to the high level of goodness that the Evolve 80 does indeed demonstrate, that a certain amount of weight is needed, but I can also see where this might be off-putting to some folks.  When my principal tester (my SO) first put them on, that was the very first comment.  That and the headband pushed into the top of her head.  *I* did not notice the headband issue. This will NOT get in the way of me using this headset – just something to which I will need to accommodate and in no way impedes my previous comment regarding comfort.

The Jabra Evolve 80 is a great awesome wonderful seriously nice piece of work.  You can get one right here.