The nice folks at Logitech contacted me recently and offered to let me preview the BCC950, a small group conferencing camera.  The box actually says “Logitech for Business” and “BCC950 ConferenceCam.”  Either way, Logitech touts this unit as “Optmized for Microsoft Lync” so naturally I was interested.

The Microsoft Roundtable (CX5000) is an excellent device with 360˚ video and audio tracking, a built in dial pad, and satellite microphones to handle a large area.  However, it also comes with a steep price tag.  A little eBaying just now shows the CX5000 anywhere from $400-1700 used.  Other conferencing camera solutions are pricey also.

The BCC950 appears to run out at $199 at eCost.com or as much as $239 at dell.com.  But for a small conference room, this could be the unit for you.  Much lower cost, a solid feature set, and totally plug-n-play when I hooked it up to my Windows 7 laptop.  My Lync client saw it as a valid audio/video device without me having to do anything. 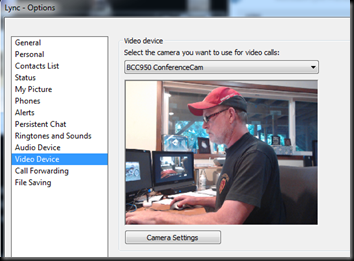 Setup for the unit was very straightforward.  The base unit is solid, with controls that are both easy to use and clearly marked.  The camera actually sits into the base, but there is also an 8.5 inch extension.  Here is the unit in both modes: 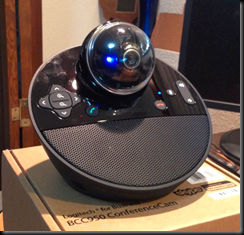 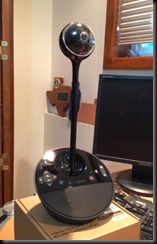 All assembled, with the extension, the BCC950 is about 14 inches tall, and takes up only about a 6 inch circle on my desk.  It comes with LONG USB cables and an AC adapter.  I tried the BCC950 with both and was happy with the results.  I did make a point of plugging in the USB power cable in to a powered USB hub, but it performed equally well with my workstation USB ports.  All in all, from taking it out of the box to completing the setup took less than 10 minutes, and that included me reading the inside of the box where Logitech put the assembly instructions. 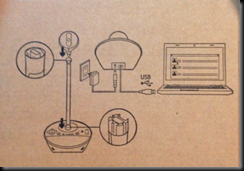 How well does it work?

With a claimed 78˚ field of view, and a 180˚ pan, AND zoom, it would seem that the BCC950 would be near perfect to match up with Lync for a small group meeting.  And that is exactly what I found.  The picture is crisp at 1080p, and while I do not have facilities to measure frame rate, the claimed 30fps delivered smooth motion.

I mentioned earlier that my Lync 2013 client accepted this unit with no issues; I also tried it with joining a meeting using Lync Web App (2013 pool), and the results were equally excellent.  Here is a sample pic.  The unit is sitting about 30 inches off my left shoulder… the clarity is good, the focus is good, and the field of view is about 6 feet wide.  The lighting in the room is both outside sunny and inside floodlights in the overhead.  The BCC950 adjusted itself without my prompting and delivered a good mix of resolution and contrast. 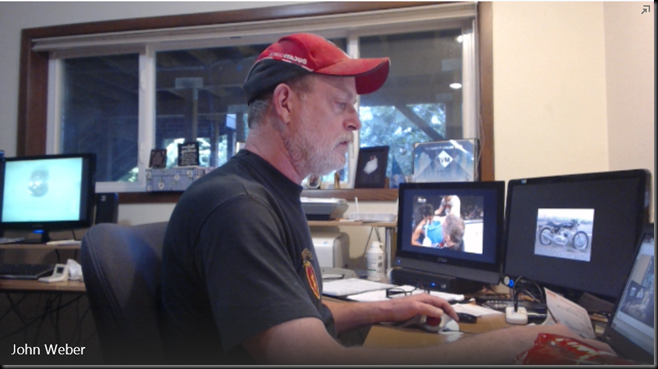 The audio was surprisingly good; far better than other units I have used.  Clear, loud, and not tinny at all.  The microphone picked up direct voice sounds and the advertised anti-echo worked well also.  I achieved some nasty feedback, but I had to try pretty hard to get it.

The Logitech BCC950 impressed me with great video, excellent audio, and the included remote allowed me to control the unit from across the room.  Setup was very simple, and when used with Windows 7, totally plug-n-play.  No drivers needed.  Functionality with both Lync 2013 Preview and Lync 2013 LWA was better than expected seeing as how the Lync 2013 bits are still in preview and not RTM.  The BCC950 was significantly better than the built-in camera on my laptop; and the prospect of using this unit for a small group conference instead of the usual huddle is very appealing.

I wish it had some automagic function that tracks the active speaker, but that undoubtedly would drive up the price.  All-in all, a great compromise unit for the small conference room.  When it comes time for my clients to hear some hardware options for their Lync deployments, I will certainly be mentioning the BCC950.