<As I understand it, using WAS for READONLY does not require a license.  See this, and more importantly, this.  The second link states that “…view-only.  By default, Office Web Apps is view-only.  View-only functionality is provided for free…”  Excellent!  That is all we need for Lync 2013.>

Documentation for this process is NOT contained on the Lync 2013 online help, but rather in the Office Web Apps and SharePoint sites.  Take a look here.  What I found was a fair amount of back-and-forth comparing steps and whatnot, hence this guide which will (hopefully) bring it all into one place.

At any rate, what I am going to show is how to build a WAS farm, complete with HLB.  The tools we are going to use are:  Topology Builder, PowerShell, a squeaky clean set of Windows Server 2012 hosts, an internal PKI CA, and an HLB.  For HLB, I am using my Kemp VLM-100.  Reverse Proxy will be TMG.

A note on the TMG as reverse proxy.  I am making a whole new DNS and IP for this service.  As such, I am going to export the certificate for my LSWASPoolInt which has LSWASPoolExt.tsoorad.net as one of the SAN’s and place it on the web listener.  For a real deployment, I would conserve IP space and just use the existing Lync web listener and add the LSWASPoolext FQDN to the certificate for that listener.  This will require you to plan your external Lync DNS space in advance, along with the IP space.  But you already knew that, right?  DNS and IP planning is crucial to Lync success – this is just another example of that concept.

This is going to have more than a few steps to it, so let’s dive in.

First off, when dealing with WAS, *ALL* WAS related commands are PowerShell.  Here is a handy guide.  Second, and I have not yet figured out how to turn it down, WAS logs a ton of stuff in the event log.  As in 200k entries in one week!!  But, I digress.

lswaspoolint.tsoorad.net (my internal FQDN for the WAS farm): 1.1.1.45

For my load balancer, I decided to just bring all traffic for the WAS straight to the HLB.  So the HLB in my case will only have 1 virtual server and I will bring internal and reverse proxy traffic to 1.1.1.45.

Here is the topology builder viewpoint.

Here is the Kemp HLB virtual server setup.  Note that it is marked as DOWN because we have not yet installed anything!

While you are at it, now would be a good time to envision your external and internal access paths.  Here are the firewall considerations. Ensure that the following ports are not blocked by firewalls on either the server that runs Office Web Apps Server or the load balancer:

Next, open the Windows PowerShell prompt as an administrator and run the following example commands to install the required roles and services.  You may find it helpful to set the execution policy in PowerShell to remotesigned or unrestricted.

I always tack on the “-restart” so if servermanager wants to reboot it will without asking.

Run windows update to get patched.  Your call on this step, but I always do it just to claim due diligence.

Get a PKI certificate that will be trusted by all players.  I used my DigiCert.com utility to generate the CSR – I wanted to include the internal and external URL’s which means I needed a SAN entry or three.  In my case, I used the following:

Finally, we are ready to actually install Office Web Apps Server.  You can get the Office Web Apps server install from here.  There is not a lot to note on this install… I just banged through all the defaults.  However, I will note that I needed to execute the setup.exe as an Administrator to get it to run through properly.

Once you have your WAS installed, now is a good time to remember that there is NO GUI – this thing is PowerShell only.

OK, from a PowerShell prompt:

If you are doing a two server farm, here is what you need.  I ran the first command on ls2013was1.tsoorad.net; this affects the syntax on the second server command!

On the first server:

Note that the “–ssloffloaded” is different – which implies that the certificate is not needed.

Then, on the second server:

Let’s take a look at our new farm.  Note the AllowHTTP, SSLOffloaded, and Machines attributes. 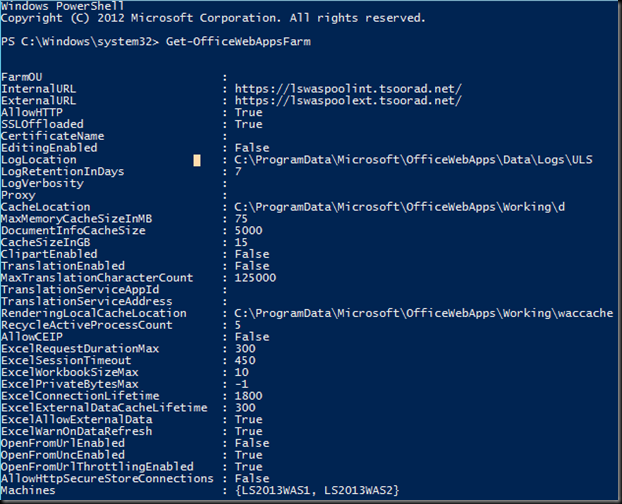 To further test that we have a viable WAS farm, we will hit the following URL in a browser:  https://lswaspoolint.tsoorad.net/hosting/discovery/.  The actual response is a good deal longer than the screen cap I am showing…of course you will want to test your HLB to ensure that each server is actually responding.

Alright, now to configure TMG as our reverse proxy so external users can enjoy the WAS goodness too.

First, get the WAS pool external URL SSL cert installed onto the TMG.  In this case, I am going to use my internally generated certificate; in real life, you will need to have a certificate that is trusted by any and all users – typically that means a public certificate.

I am using the same listener with a revised certificate.  So, what we need now is a just a new TMG Website Publishing rule that takes the URL “lswaspoolext.tsoorad.net” and send it to our WAS VS on 1.1.1.45:443. Here is a link to the official document for completing this task.  Note that these instructions assume you are going to be making a new web listener – you may have to do a little judicious reading between the lines to accomplish this task for your environment.

Also, note that my rule in TMG did not test “good” but it works “good.” The sharp-eyed reader will also note that my current login does not trust the lab domain CA – hence the certificate error showing here.