Yes, Matilda, another supporting software piece to examine and run through the Tsoorad Lab Experience.  This time AudioCodes released a FREE tool to help you manage your AudioCodes phones.  Previous to this, the AudioCodes EMS required some cabbage up front; this tool is FREE.  Up to 500 managed devices.  No SBC, SBA, or MPxxx management, but hey…

The EMS package allows you to manage all of the AudioCodes family, SBC, analog gateways, 4xx phones, and SBA’s too.  The IP Phone Manager Express does just the phones.  But, this may be very attractive to you.  Let’s take a look.

You can download right here. The basic documentation is included in the download.  The installer, once you have a suitable host SERVER, runs with zero issues.  I would think that something like this tool would be perfect for running on a workstation, but that is not what the documentation calls for.  To whit, the IP Phone Manager Express calls for a clean install of Server 2012R2.  Hmmm.  I suppose you could run this on a virtualized instance on your workstation…I, of course, am running it in virtual in my lab.  I also ignored the resource allocations called for in the documentation.  I used a single core and 2GB, and things appear to be hunky-dory. I imagine if you need to manage more than a few devices your resources might need to increase just a tad.

Here is the official market-speak on the features:

Also note that AudioCodes thinks that you can step up to the “Pro” version (part of the EMS) with one button click.

For a quickie comparison of the different flavors offered, take a look at this. 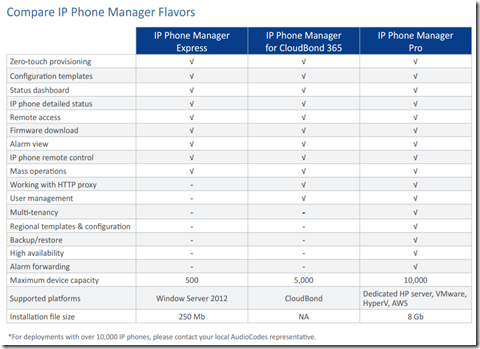 </Rant> I would like to see this tool run on something other than a brand new server.  I see SQL Express and IIS getting installed…isn’t there anyway to get this running on something other than a new build? Not everyone has an environment leveraging Datacenter where you can load up as many servers as the hardware will handle Using an existing server would make this tool really free instead of incurring the server license. Or work out a way to get this into an admin workstation?</rant off>

I built on a clean 2012R2 server, patched (250+ of them – yikes!) it up to snuff, and then simply executed the installer.  I think I may have clicked on a few license boxes or “yes” selections, but I did nothing other than defaults.  It wanted a reboot.

After reboot, you can go to http://serverIP/IPP and you are in.  Install done.  Even I got it right the first time through.  That will change in the next section.

Note:  some manual editing of cfg files is needed.  For some weird reason, notepad on my server presented the cfg files as one long line.  Yucko.  I installed Notepad ++ and it worked as expected.  Don’t know what the issue is, but I know how to get around it!

Following along with page 13 of the aforementioned admin guide, I modified my DHCP server to present option 160 as follows: 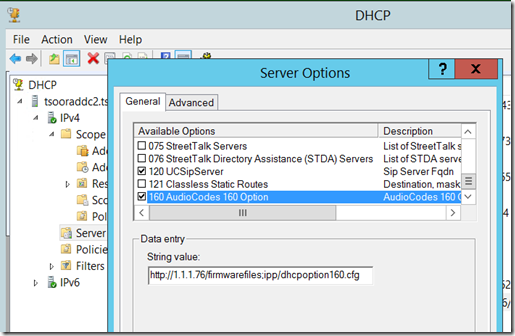 If you are modifying a previous entry for your AudioCodes deployment, be aware that the previous entry was most likely FTP, not HTTP.  Ergo, my comment from above.  Using FTP (like I did) results in things not working as expected.  OOOPS.  This time I even read the documentation first, and yet I still managed to screw it up.  Just a heads up.  I know that my gentle (genteel?) readers would never make such a sophomoric mistake.  I also took the liberty of restarting the DHCP service to make sure things were right.

Back to the voluminous instructions on page 13, plug in your phones.  In my case, being POE, I just pulled the Cat5 and replugged it effectively restarting the phones.  After you get this tool setup, you will be able to perform that magic trick remotely to every phone in the org.  You can send messages to the individual phones - the practical joke prospects are endless.

Pretty slick.  I might suggest changes to some of the GUI, but in the overall scheme of things, the entire tool works really well.  The navigation tree on the upper left gives access to everything, but you can do the clickety thing on various elements on the center and right sections and that works equally well.  Being able to do mass actions is an enormous plus.

Here is my new tool.  Use the secret squirrel code from page 13.  And then change it to suit your security policy.  You do have a security policy, right? 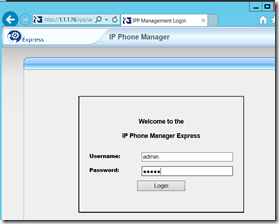 At any rate, here is our interface in all its glory.

I think the buttons in the middle could be a different size… but the automatic refresh makes up for it.  Note that I have the one 420HD phone registered.  Interestingly,  the IPP Manager ships with firmware files… and apparently the 420HD.img that came with was newer than what was on my phone.

I noticed this because as the phone was booting, it flipped into upgrading its firmware.  Nice, in some cases.  Maybe not so nice in others.  Just something to be aware of, I guess, if you start doing magic tricks in the middle of the day.

I downloaded the newest 405 IMG available, changed it’s name and pushed it up there for my 405 to discover when it restarts.  I have cleverly avoided that moment until now, because I want to use it as the demo for this article.  Here is the 405 before restarting it to pick up the new DHCP Option 160:

Note the firmware version.  And the incorrect Option 160 information.  You can’t see it, but rebooting the phone at this point resulted in the phone snaking the new firmware and working through the process to update itself.  And now we have this:

And in the IPP Manager we now have two devices – the unregistered part means that no user is logged into the phone.

If you get the dhcpoption160.cfg file correct (and use HTTP not FTP) rebooting phones will result in them showing up in the interface – its as easy as that.

Log in to the phone silly!  IPP Manager handles the device…SfB/Lync handles the users.  Using the phones’ web interface (which, btw, you can access right from the IPP Manager), I did an extension+PIN login, and now we have this:

One of the nice things here is that system-wide firmware updates can be done centrally.  Upload the new firmware file..

and tell the phone to update… 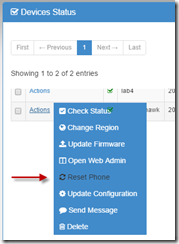 There might be a better way to accomplish this task, but, gee, it worked for me.  You could have a boatload of one model, upload one file, select the appropriate checkboxes, and tell them all to reset at once. At any rate, we now have two devices, both operating the same firmware whereas before we had two different firmware versions.

You can work with configuration files en masse, or individually…If you need to see what a configuration (cfg) file can do, take a read of this document, or go searching for LTRT-11950 which will probably require a visit to www.audiocodes.com.

If you have more than a few Audiocodes phones, or even if you do have only a few phones, the new Audiocodes IP Phone Manager Express is a great piece of kit.  It does, however, require a server platform – but you can get around that with some virtualization.  Offering one-stop device management and visibility into the devices without having to go to a user’s desk, the IPP Manager can streamline bulk operations or allow you to get as granular as you want.  Just the firmware tracking and updating makes it worth looking closely at this tool. I would like to see it run direct on an existing server and not require its own server; ideally it would be nice to have it run on a desktop.  But, even with the implications of needing a server, free is a very good price.

I guess to be fair to all the other systems out there, I should mention that this tool manages Audiocodes IP phones, and is not restricted to just SfB/Lync environments – but why would you want to use another VOIP solution other than Skype for Business?