You would think that the market is fairly saturated with speaker-phone devices that plug in via USB or attach via BT and work with anything that is connected to the PC.  Right?  I mean, these things have been around for almost as long as I have been knowing what a USB connection is and the difference between an A, and a B USB.

Apparently I am wrong – Polycom has a device called VoxBox.  I have been living in a cave lately, from all appearances, and totally missed this product.  The Polycom website claims that the VoxBox is certified for Office 365 and SfB.  You’d think so seeing as how it connects to the PC or BYOD via USB/BT and is therefore abstracted from what is actually providing media.  It thinks the media is coming right from the port.  But, SfB does know what to do with it.  Teams O365 doesn’t like the on-device controls, but Teams O365 doesn’t like any on-device controls (yet).  So, I think it is safe to say that subject is a wash in terms of function.

Polycom VoxBox sets a new standard in ultra-compact USB / Bluetooth speakerphone performance and packs it with HD Voice and patented NoiseBlock noise reduction technology. Give your mind and ears the quality they deserve—in offices, in huddle spaces, and wherever your travels may take you.

Let’s see if that is true in testing.

2 cables (USB and USB+security cable), a little wrench (for the anti-theft cable) and the unit itself. 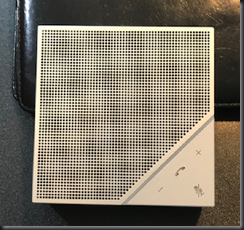 Square, solid, brushed aluminum-like finish.  Looks good; feels good; and the bottom has whateveritis that stops it from sliding around.  So, pretty good from that angle.

Here is the official data sheet.

As you might guess, I did not test the VoxBox with just anything, I used SfBS and Teams Office 365.  Surprised?  Ha!  Don’t be.  I plugged it in, my laptop went dink-donk, and I had a functional speaker phone.  It doesn’t get any easier.

Lights are easily visible, even in office lighting levels of brightness, and the lights themselves are understandable as to what they are indicating.  As long as you don’t expect the + and – to provide video zoom you are good to go. 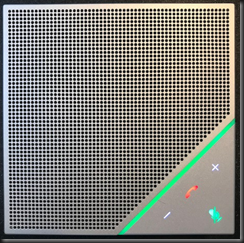 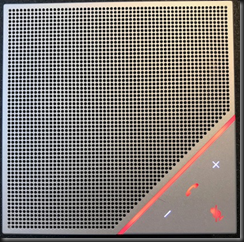 Audio was clear and presented with good volume out to a 12x12 room size.

This is a high quality speaker phone device.  I had zero issues working this device with both Teams O365 and SfBx.  I set up about two feet from the device and normal operations were crisp, clear, and all the device features were indeed as advertised.  With the exception of achieving world peace, I would say the marketing mavens had accurate VoxBox blather.

You can get one right here.