I think that RGS is a wonderful thing, and something that every SfB deployment should evaluate for applicability.  Do you detest the SfB Response Group Service?  Then you might not want to read any further.  However, should you recognize the utility of said service, then this review might be just the thing you need to read.

SfB Response Groups allow the creation of simple hunt group or IVR-type grouping of agents to handle calls to a common DID.  They can work to the outside world, or be simply internal; but either way, the RGS is a great tool for those situations to which the RGS talents are applied.  I won’t go into what those talents are, or how to put the entire thing together in this article; rather this is a review of a spiffy tool from New Zealand Skype (well, Office Server and Services) MVP Andrew Morpeth.  What he and his team have done is create a nice GUI interface to the entire RGS management problem.  Let’s take a look at Call Flow Manager (CFM), shall we?

Before we start, you may wish to review the official documentation for RGS.

If you have issues un-zipping a distribution and placing it a server that has met the prerequisites then you have larger issues than I can help with.  Dirt simple.  Just leave things in one folder, and put that folder on the drive.  Execute CallFlowManager.UI.exe and away you go.  You might want to make sure you know the license information before you start, as that will be the first question asked when the tool starts up. And oh yes, run this tool as administrator.

As you might ascertain, you will have best results doing CFM on an SfB Front End server.  I put mine on the Tsoorad.Net Test Lab SE.  Truly an awesome piece of gear; used and abused on a regular basis.

OOBE RGS requires three separate interfaces – an admin headache at the very least.  CFM puts all of that into one GUI.  I had a little challenge getting my head around the interface, but that was me – in the end, I like it quite a bit.  Especially the creation and assignment of business and holiday hours – a PowerShell goat rope for OOBE RGS management.

CFM also offers 10 IVR options rather than four.  And you can flip an RGS workflow between hunt and IVR.   Phone number visibility rounds out the technical offering.

I had zero issues using CFM on my SfB SE.  In fact, one of the nicer things that I always forget is to run things as admin.  C’mon Microsoft.  I am logged in as an administrator, why make me right-click and runas?  CFM checks for you, and rather than barfing in your face, flips up this nice little notice and offers to fix it for you. 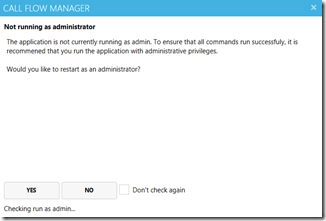 If like me, you forget your brain at times, CFM has a nice search feature.  Here I have searched for RGS1 and discovered those elements that pertain to anything in my SfB that hints at RGS1… 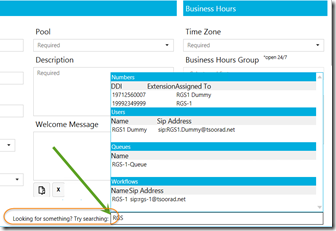 Very nice.  You might also notice that I carefully name my RGS components to include the workflow name…makes things stick out later when you discover that your documentation is not as up-to-date as you claim in your work reviews. You can search on almost anything.  You have no idea how stupid I can get while creating RGS workflows – I forget what I called what, and who belongs to what all the time. This feature alone is worth giving CFM a test drive.  Here I have quick search for TWO letters… 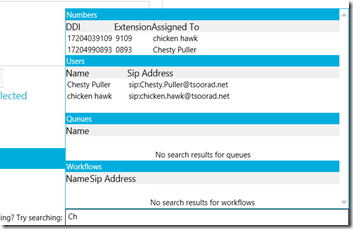 Let’s take a look at the overall GUI. CFM opens to this screen.  I have exercised the upper-left pull down to select an RGS workflow.  Here you can see pretty much the basics of the workflow.  You can change/edit anything on the display, and then save it before moving to something else.  I like this much better than the native tool. 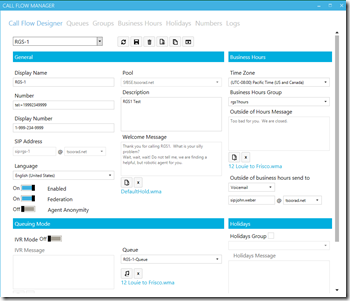 Queues allows you to create and manage RGS Queues.  About the same as the CSCP, but with CFM, you get everything you need in one interface.  IMHO, clearly much better. 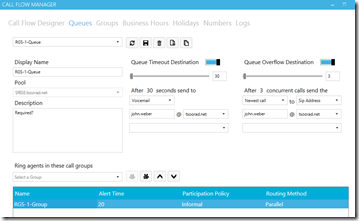 Groups does the same as Queues, and my comment above holds true here also. 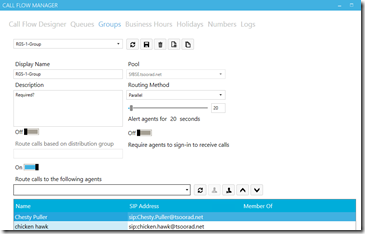 And now to the “good stuff” – Business Hours (and Holidays).  In the CSCP, webpage, PowerShell combination of native tools, business hours and holidays are, again IMHO, a royal PITA.  El Yucko to paraphrase my second child.  In CFM, you are given a nice GUI to create, edit, and play with both of these options that allow the final customization of the RGS in terms of open hours and closed hours.  The business hours selection comes with pre-worked up day selections, so that you don’t even have to think too much.  Pretty nice for those of use with both brain cells that are already full. 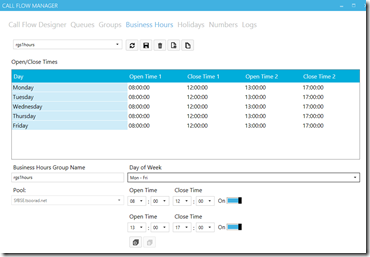 The Holiday hours works pretty much the same. 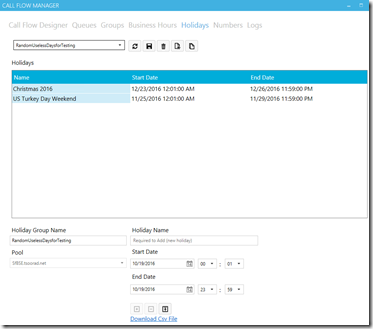 The Numbers page will show you all the DIDs that available so that you don’t do the John thing and try to assign a number to an RGS that is already assigned. 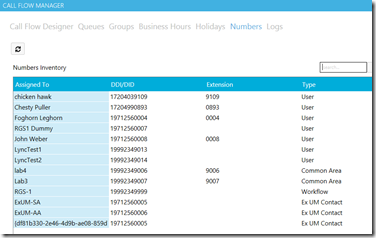 …and finally, Logs.  This little nifty detail will show you all the PowerShell that is going on under the hood as you create or modify various elements of the RGS structure.  I think it would be even nicer if the entire PowerShell command string was shown rather than a brief “hey, we did this general command.” 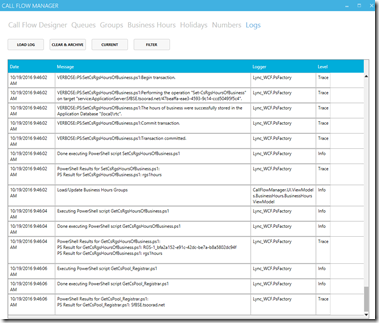 I have always disliked the CSCP view of the RGS with the workflow, queue, and group arrangement.  My brain operates on the group, then queue, then create workflow concept, and the tool could be rearranged to reflect that.  However, having observed that, there is nothing WRONG with what is here.  I will reiterate my comment about the logs, and then that is that.  For something like this to have only TWO nitpicks is remarkable all by itself.

Without reworking all the screen caps already shown, here is the same workflow as above, but seen from the native web tool. 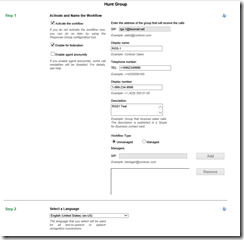 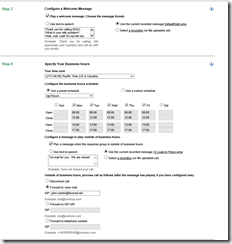 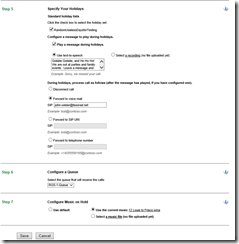 Note that the queues and groups are not here, and to put together the business and holiday sets, you will need PowerShell. Clearly, CFM does a much better job of presenting options, creating answers, working up the solution, etc.

And the final Bit of Goodness

CFM can take a workflow that is “hunt group” and transform it to an “IVR” – something that the native tools cannot do (to the best of my knowledge).  If you choose to take this action, be warned that it appears to be a one-way street.  Once an IVR, always an IVR. 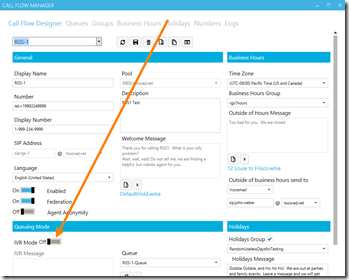 And when you get to the IVR slice of life, the native tools only gives you four levels, CFM blows past that as mentioned above.  So nice.

Where to get this piece of greatness