Another new toy.  You know I love them.  So bright and shiny; full of supposed goodness; replete with stuff the average user is just dying to have at their fingertips.

In this case, Sennheiser has produced their version of the speakerphone “hockey puck” – optimized for Lync, and capable of doing the same for your average “mobile device.”  That could be right handy – my Nokia must have the world’s smallest speaker.  Which is odd, because the alarm function will blow the wax out of your ears, but the volume for the phone call has you wondering if the phone is even turned on!

First off, the Sennheiser rep who squirreled this little puppy away for me was absolutely glowing about the SP 20.  Not being a huge speakerphone user, let’s take a look at this device from the viewpoint of someone who don’t know Jack.  Which would be me.  How lucky, eh wot?

Here is the official, in-the-wild, Sennheiser market-speak for the SP 20.  Note that the website thinks there is some difference between the pedestrian SP 20, and the oh-so-much better SP 20 ML.  It’s like watching Khan from the “Wrath of…”  Ah well.  there is your obscure movie reference if you wish to have a partial explanation of  where my brain goes sometimes.  My SO says I usually off in space somewhere, but we won’t talk about that.

Designed for Unified Communications business professionals on the move using softphone via PC, mobile phone or tablet. Users who travel light and demand excellent conference sound will appreciate its user-friendly functionality and exceptional design. Compatible with major UC providers and softphone brands such as Skype for Business, Avaya, Cisco and IBM.

Here is the obligatory pretty picture from the previous link.  Note the attached cables.  None of this separate cable stuff here. No sirree!  And they have a nice storage slot on the bottom of the SP 20 also.  Along with an arrangement to hold the end connector solid so that you don’t pull this out of your bag with it looking like the reavers from the Matrix® series. 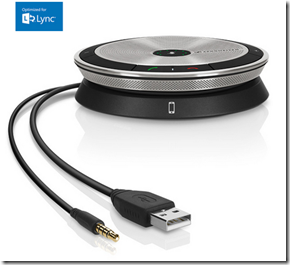 Here is the real thing, in a real call, muted.  The controls and lights and all seem very top-notch.  Overall construction quality seem equally nice and solid.  The attached cables are, according to my Stanley tape measure, 30 inches.  That will be 76.2 cm, but only if you are wired into that metric thing. 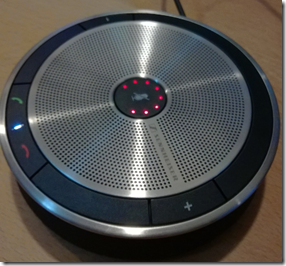 I guess so!  I did nothing but plug the SP 20 into the first available USB port, and presto!  It was working.  How can you go wrong with that?

Starting with the SP 20 in the box, to get to the point where my SfB client showed the SP 20 as an audio device option took about 30 seconds.  Audio quality is somewhere in the excellent category.  Controls worked as expect, with button pushes being reflected in both SfB and the operating system – like the volume slider going up and down.

Now on to the Fancy Stuff

Sennheiser would have you believe that the the SP 20 can connect to your cell phone and via the SP 20, connect into a Lync/SfB call.  Please wait while I wade through the extensive documentation that came with the SP 20.  While you are waiting, you should consider the concept that the SP 20 ships with a “Safety Guide” that comes in 17 (!!) languages and is easily three times the size of the user guide.  At least they did not warn me not to take the SP 20 into the shower.  But they did warn about everything else!  Gotta love them lawyers.

Wow.  Just discovered “music mode”  Nice. At one point I had the SP 20 answering calls from Lync whilst still playing muzack from my Nokia.

There is software to download, which I did not seeing as how everything I tried worked.

I like it.  In my usage, I used the SP 20 ML with SfB with zero issues.  Plug it in and it worked.  Great quality build, great audio, attached cables, and it works on my cell.  So much to like in such a small package.  According to Sennheiser marketing:

“A CONFERENCE CALL IN YOUR BRIEFCASE...Turn any room into your office...No more searching for an available conference room. Set up an impromptu conference or share a call with high quality sound – in any room.”

I can see that this unit will easily enable a small conference room.  You can get one right here.

Have you perhaps used the CX 100 in the past? If so how do they compare?