You have internal users that are Enterprise Voice enabled, and they possess sufficient power/position to not want their DID to be advertised when they call out.  What to do?

With Lync 2010, you can manipulate ALL outbound calls from Lync to have a common Calling Party inserted into the call setup – but this manipulation occurs at the trunk level for every call no matter who is placing the call or from where in your environment.  One rule covers it all.

With Lync 2013, we can now manipulate the trunk action based on the Calling Party number.  For instance, let’s say the CEO calls out for some reason, but does not want their DID to be advertised.   Instead, they want the call to appear to be coming from the executive secretary. With Lync 2013 we can now provide this functionality and apply this to only specific numbers while the remainder of the calls go out as provided for in the general configuration.

Let’s take a quick look at how this is done.

First, we assume that there is a valid Lync 2013 topology that includes at least one mediation server or mediation pool, and at least one valid trunk out to somewhere.  I also encourage a little test as shown – just to make sure that things are working as expected.

The sharp-eyed reader will note that I am using fellow MVP Ken Lasko’s LyncOptimizer.  No point in reinventing the wheel!

For our example, let’s stipulate that the CEO wants to dial out from his assigned DID number, but have it appear to the called party that the call is coming from the CEO’s secretary.  For this we will have:

You may want to run a quick test on your trunk, just to make sure your calls behave properly.  Note that when you are testing at the trunk level, you need to consider what the normalization rule is going to add or subtract to the digits entered by the user.  From above, see that the dialed number: 5033121234 normalized to +15033121234, so this is the value to use for testing at the trunk.

NOTE:  My trunk needs to strip the “+” before sending the call out, and usually this happens on the default “Called number translation rule” that I put into place.  This new calling party translation rule will go around that other rule, so we need to be careful and take the “+” out when creating the new rule.

Build the translation rule – see how the built-in logic gives you a mini-tutorial on the pattern match.  Slick. Remember the normalization will change what digits the user enters, and that you need to have the translation rule see the number as it trunk will get it from the route.  The length is also important as that can change how the TRUNK’s translation pattern works.  Digits to add is literally what you want to change the calling party into. 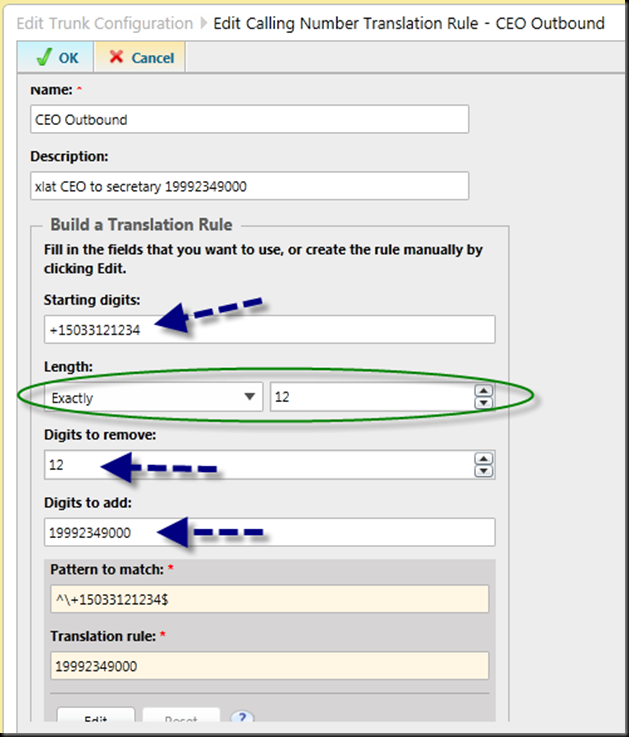 Click on “OK” to finish.  And let’s test our work. At the bottom of the trunk configuration under “Associated translation rules”  there is another testing area. Be sure to select “Calling number.”

Remember to commit your changes!

I used an extreme case here to show the possibilities.  Your carrier may have some logic that will only accept numbers within your DID block as calling party numbers – if that is the case, you will need to confine yourself to using those numbers or have the CO potentially replace your carefully crafted calling party translation with a generic Caller ID value.

First of all thank you for this guide. How would I go about applying this to a certain user, if at their discretion they wanted to show the DID for some calls but not for others? What I am thinking is dialing a prefix such as # before they dial out to trigger the rule, and dialing as normal would leave their correct DID in place.

Thank you. I have never tried your scenario before. Usually folks WANT their caller ID to show.
What I have done is send a common caller ID out on every call - so that the Cx0 can dial out, but the company's generic front desk number is what is sent as the calling party number.

How do you set it up so all calls show up as your generic front desk number?

In general, you could take the example above for the CEO, and change the calling party number to match anything. Then any calling number would get replaced with whatever you put into the translation rule.